At the site of the current city there was a village called Kissonde or Quissonde.
The Portuguese tried to colonize the region in 1587, founding the village of Benguela Velha. This village was abandoned shortly after, and rebuilt in the place where the city of Benguela is located today.

After centuries of stagnation, in 1771 the Portuguese returned to their original location and built the village of Benguela Velha, now Porto Amboim. In 1870 the first civil parish appears and in 1912 the municipality is installed.
It was the seat of captaincy in 1913, serving to support the colonization of the Amboim plateau.
On September 3, 1910, the Benguela-Velha postal station was created by a Private Ordinance signed by the then Governor-General of Angola José Augusto Alves Roçados. The post office had the category of third class, being in charge of the town's governor.
The municipality of Benguela Velha, integrated in the District of Cuanza-Sul, was created by Provincial Ordinance No. 49, of February 20, 1919, being the post office elevated in the year following the category of second class, changing its name to Estação Telégrafo- Postcard from Benguela-Velha.
Porto Amboim is directly linked to the advent of coffee culture, developing since the 1920s thanks to this cultivation. It was connected by rail to Gabela, in 1922-1925, in an extension of 123 kilometers, on a reduced gauge.
On September 10, 1923 Benguela Velha is elevated to the category of village with the name of Porto Amboim. There is a geographical map that seems to contain a plan to install a reticle for the village: the "Hydrographic Recognition of the Bay of Benguela Velha, West Coast D’África", from 1924, which must correspond to the phase of coffee outbreak. However, the photographs of the time show only a very modest, incipient settlement, connected to the small sandy pier and the railway.
On January 15, 1974, the city passed. 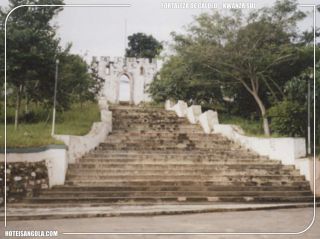