Angola is one of the most exciting and least visited bird watching countries in Africa. Sheltered on its generous borders is a multitude of habitats: deserts in the southwest; arid savannas in the south; mountains in the west, with Afromontane forests and associated pastures; tropical lowland forest in the north and Cabinda; sub-montane forest along the escarpment, and vast areas of broadleaf Miombo woodland in most of the east.
With the possibility of developing several walks in places such as kumbira, Morro do Moco, Twndavala, etc ... Angola offers its visitors the possibility to observe several endemic birds.

What is Bird Watching?
Bird watching is an ecotourism tour that aims to observe birds in their natural habitat, without interfering in their behavior or in their environment. The roadmap is a legitimate form of ecotourism exploration of natural areas, as it is a low-impact practice. The public that seeks this type of activity is a specific audience that has a high degree of environmental awareness, being attentive and seriously adopting practices with minimal impact on natural environments.

What is an Endemic Species?

An endemic species is an animal or plant species that occurs only in a certain area or geographic region. Endemism is caused by any physical, climatic and biological barriers that effectively delimit the distribution of a species or cause it to separate from the original group. When the separation occurs for a long period, the isolated group undergoes a natural selection that develops a differentiation from other members of the species. The isolated environment has characteristics of climate, soil and water that are different from the others and selects the species that live there in a unique way: certain species will only develop in that environment. For this reason, the greater the degree of specificity of the environment, the greater the degree of endemism - that is, the greater the index of endemic species.
There is a list of birds of more than nine hundred and twenty species, but there is little ornithological activity. The African Bird Club and Birding Africa have developed some activities.
Angola has a series of endemic and almost endemic species to attract ornithologists, bird watchers and flowers. Many of the nearby endemic species, such as Bustard Ruppell Eupodotis rueppellii, Parup Poicephalus ruepellii by Ruppell, Lovebird by Rosy Agapornis roseicollis, Swift Apus bradfieldi by Bradfield, Violet Wood-hoopoe Phoeniculus damarensis, Hornbilli Monteiro, Hornbill de Montemari Benguela Long- Lark Certhilauda benguelensis, Carpe's Parus carpi, Babbler Turkeides turdoides and white tailed Shrike Lanioturdus torquatus are easier to see and simpler.
It will be necessary to travel in Angola to see the endemic Francolinus griseostriatus endemic with gray fringes, the Swierstra francolinus swierstrai, which was recently rediscovered after a period of 40 years, red crested Mousebird Colius castanotus, red crested Turaco Tauraco erythrolophus, Angola Slaty Flycatcher Melaenornis brunneus, White-face Eye-eye Platysteira albifrons, Gabela Bush-Shrike Laniarius amboimensis, Monteiro's Bush-Shrike Malacanotus monteiri, Gabela Helmet-Shrike Prionops gabela, Gabela Akalat Sheppardia gabela, Pulitzer Machalusus Longbow and Macronus Pulitzer Sunbird Cinnyris ludovicensis. Other prized species include Angola Cave-Chat Xenocopsychus ansorgei, White-headed Robin-Chat Cossypha heinrichi, Cisticola Cisticola thin-tailed melanurus and Bocage's Sunbird Nectarinia bocagii.
Most of these endemic species were seen on the ABC tour, as well as many other interesting and limited species.
Tauraco with red crest is one of the endemic attractions
The Tauraco erythrolophus, (Red-crested Tauraco), is a frugivorous bird endemic to Angola. It belongs to the genus tauraco a group very similar to the passerines of Africa and belongs to the family of Musophagidae. His trill sounds a little like that of the forest monkey. It lives in the forests and savannas of Angola, Zaire and southwest Africa. It has a red crest feathered on its head like a crown. The nostrils are round. Between males and females, there is no difference in size and color. The basic color of the plumage is metallic green and blue. Due to its plumage, it is very difficult to be seen in the trees. Measures about 40 centimeters. The red-crested Tauraco lives mainly in the treetops and rarely goes down. He is an excellent climber and lives among the trees. their diet consists of fruits, berries, seeds, snails and insects. During the court, he dynamically points the crest and raises the feathers. Usually lives as a couple, rarely as a small family alliance. In case of danger, he remains immobile and flees at the most favorable opportunity. The nest consists of two eggs and is built on dense branches. Both parents hatch the eggs that hatch after three weeks. After four weeks, the young leave the nest 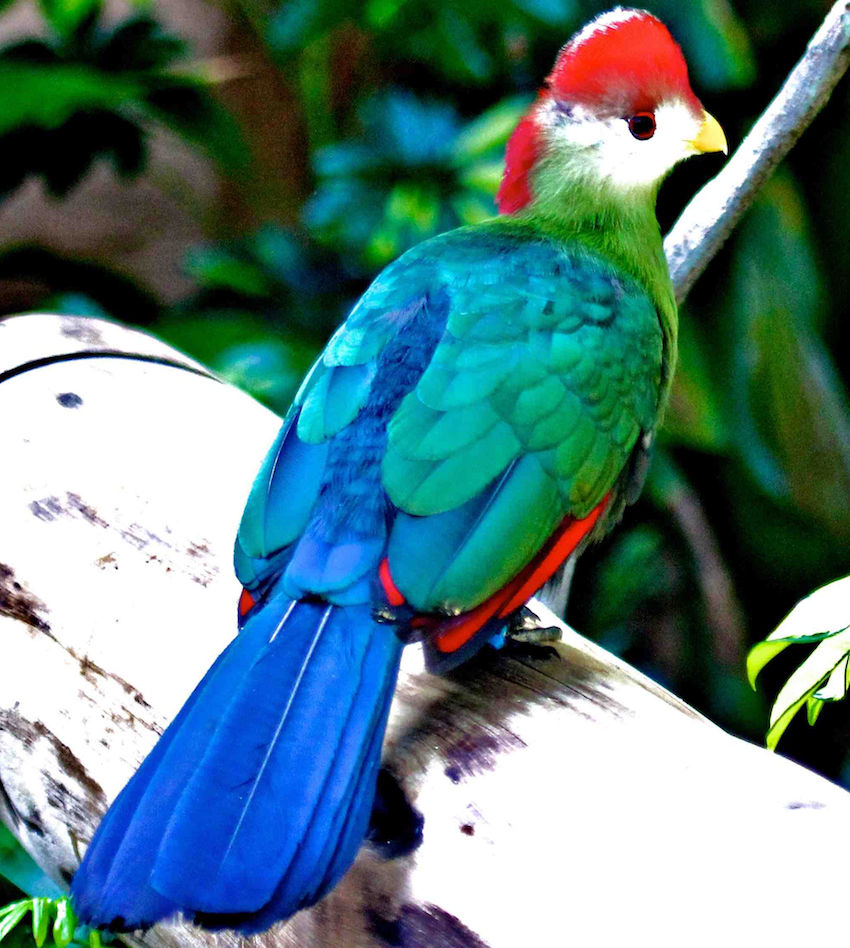 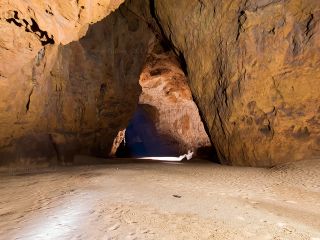