Located in Lobito, Benguela province, it is a faithful portrait of the ethno-cultural diversity of the people of Angola and its rich museum collection is proof of this. It has more than 1,500 pieces, 50% of which belong to the Lunda-Tchokwe people.

The estate represents the diversity of Angolan culture, since, with its reopening, in the era of the then State Secretariat of Education and Culture (post-independence), the government instructed the then Museum Network to reinforce that of Lobito with cultural pieces from the Dundo Regional Museum (Lunda Norte) and Anthropology (Luanda).

“Right now, in addition to the Ovimbundo ethnic group, we have pieces from the Tchokwe, Kimbundu, Fioti, Bakongo and other ethnic areas represented here, even if in small numbers,” he stressed, pointing to 30 to 45 percent of the spoils from the Lunda ethnic region. -Tokokwe and the National Museum of Anthropology, located in the country's capital, representing national historiography.

The Ovimbundos continue with 25 percent of the total pieces available, the Nhaneca Humbi, with 2 to 3 percent and the rest (25% pieces) portraying the different ethnographic regions of Angola.

Without pointing out the oldest ones, he stressed that the strategy has been, for each year, to value the piece most requested by visitors, keeping it on display during the following year.

As for the participation of the citizens, namely in the actions to reinforce the current estate, he said that in a decade that he is in charge of this institution, only the offer, by a citizen of Bocoio (not mentioned), of a piece called Oholo ( malmita / suit), where once you could put natural cow's milk and mush to serve breakfast.

He defended that the museum should have funds for the purchase of the pieces in the communities where they are located, because the populations are accustomed to offering them or to official visitors or in cases of inauguration of community infrastructures.

He stressed that due to this reality, preventive preservations are now carried out every two months by a cleaning and disinfestation company, but the ideal would be that this activity was in charge of museum technicians, specialized in chemistry and restoration.

He also regretted the fact that the rooms do not have showcases, which causes visitors to touch the objects.

For this reason, he expects that of the two projects in the portfolio (one in the provincial government and another in the supervising ministry), they can change the situation, through the rehabilitation of the building.
The official believes that the situation may improve, once the Statute of Museums has been approved, it remains to define the categories of some (in this case) to determine the scope (financial autonomy, ministerial or local dependency).
On the other hand, it considers that there are “good winds” on the horizon, since the Ministry of Culture has placed two vacancies (applications already sent) for higher education courses abroad, aimed at employees of the Lobito Museum of Ethnography, even so, locally a clinic is administered for each quarter, with a view to instilling versatility in the staff.

The director pointed out, as another reason for hope, the existing forecasts for the construction (on the part of Italy) of two Schools of Restoration, one for the north and the other for the south, which has seen a huge void with regard to conservation and restoration of cultural heritage and training of specialists.
Francisco Castro Rodrigues, an engineer who was linked to the Benguela Railways (CFB), was one of the promoters of research, collection and conservation of the material wealth that embodies the current Museum of Ethnography in Lobito, which, even though the colonial authorities, avoided the dispersion of the pieces then existing, having removed it from its old building to the headquarters of the administration of Lobito.

He passed through several buildings, the current building of the National Bank of Lobito, the famous Madame Bermam house, of a British citizen who, at the time of departure for the native land, offered the residence to serve as a house of culture, until the present building .
In addition to the building that houses the museum itself, the exhibition rooms, Lobito's also has the Zaire Ship (medium size) as an integral part.
The Zaire Ship installed almost at the end of the Restinga was transformed into a Library, for having transported, in the early 1960s, some nationalists who left Luanda, bound for neighboring countries, where they would join the leadership of the Popular Liberation Movement of Angola (MPLA) in the fight against the colonial regime.
Among these nationalists, mention should be made of the President of the Republic José Eduardo dos Santos.
Due to the historical importance of the facts, the ship is a mandatory reference in the contemporary Museum of Ethnography of Lobito, having essentially a bibliographic collection (exhibition of books and photographs).
Thus, for the records of the post-independence period, the Museum of Ethnography has on the Zaire Ship and on the so-called Independence Flag (the first flag raised on November 11, 1975, in the administration of Lobito, after the fall of the Salazar regime) as to its main and oldest relics of independent Angola.
The “Independence Flag”, which has been in one of the exhibition rooms at the Lobito Museum, is over 40 years old 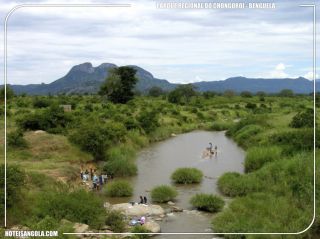 Next article
Regional park of Chimalavera