Among dunes and more dunes, some 80 km from the mouth of Cunene and the southern limit of Angola, an unexpected island holds what remains of an old settlement built by daring Algarve fishermen, which became the most important fishing center in the colony. , and which greatly contributed to the advancement of the district of Mocamedes. After decades of neglect, after 1975, Baía dos Tigres is now a skeleton of itself. A spectrum of semi-buried buildings in the desert crying out for help, some abandoned fisheries, as many dwelling houses, a splendid chapel, a school, a sanitary post, a hospital, a maritime delegation, a post office, a large number of which were built on cement pillars, in the form of a stilt, to let through the strong winds of the garrôa that covered everything as it passed. A truly amazing scenario!

The semi-buried structures of the small settlement, founded in the 1865s, show us what the settlement was like, divided by a single street that was also an airstrip. In 1975, Tigres Bay was abandoned, and the village, isolated, without drinking water or transport, succumbed to a permanent abandonment.
Tigres Bay was first described in 1485, during the second voyage of Diogo Cão to the coast of Angola, at the behest of D. João II. “Manga das Areias”, as the Portuguese navigator called it. But Tigres Bay, like the whole of southern Angola, was also slow to be occupied, and it was only in 1865 that it was first stepped on by Algarve fishermen, at a time when in Mozambique it had already begun colonization with colonists from Pernambuco since 1849 ( Brazil), focused on agriculture in the Bero and Giraúl floodplains, centered on sugar cane and cotton. 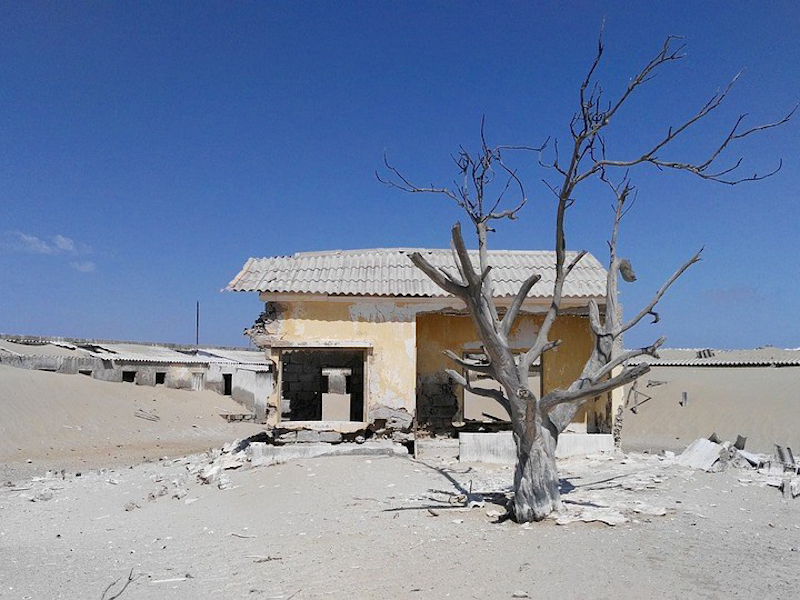 It was the crew of American whaling vessels operating in the South Atlantic, between Angola and the island of Sta. Helena, and who frequently visited Tigres Bay, where they fished, who alerted the Porto Alexandre Algarve fishermen about the abundance of fish from those cold and rich waters of marine life, The same whalers who in Moâmedes were going to water, that is, they were going to get water and buy fresh food that started to trade agricultural products and also ivory and cattle that came from the hinterland . (Hence the name "Aguada" given to that area of ​​the city of Mocamedes, close to the Bero floodplains.)
And so was born the village of Baía dos Tigres, whose only reason for being was fishing activity, favored by the abundance of fish, related to the constant rise of the waters from the depths (upwelling), cold and very rich in plankton, a factor that overlapped to all the constraints that imposed the greatest difficulties on human presence. It was no accident that the English called the Bay of Tigers, Great Fish Bay. In addition to the large amount of fish, and the marine animals that proliferate there, among which are abundant turtles, Baía dos Tigres is extremely rich in species of birds that nest there.
What about the designation "Baía dos Tigres" ... Why? If in fact along the 35 km of the island, ten km wide, there is no news of a single tiger? And apparently, there never was!
There are several theories about the origin of the name of the Bay of Tigers. Some suggest that the name Baía dos Tigres was inspired by the strong noises caused by the wind blowing south of the bay, similar to the howling of an animal, resulting from the effect of the movement of the sand of the dunes driven by the strong winds that lash the Bay, now transformed in an island. Others point to the games of light and shadows that are reflected in the sands, wearing them in streaked skin, similar to tigers. Still others report that the place was infested with listed hyenas and wild dogs skilled in pack fishing, which would have been mistaken for tigers. There is also the theory of seals, the “sea tigers”, who go there to ride the freezing waters from the south.
An overland trip to Tigres Bay was a real adventure that only daring spirits were able to experience. This text posted on the net by an unidentified countryman, shows how this adventure was lived: 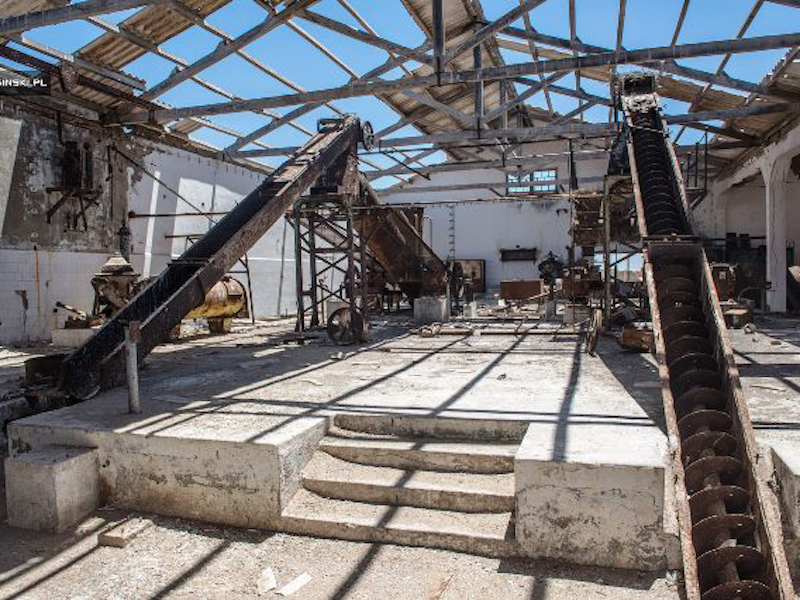 "They are dunes and more dunes, a sea of ​​dunes up to Tigres bay. An immense sea on the port side that strikes head-on with the vastness of the desert on starboard in a tone that seems to have suffered and repeated crying. in the water and others flying on the crest of the dunes. With the tires half empty we rode through time in an insistent and stubborn fight against the waves of loose sand. Like a sailboat in the open sea digging waves without paranormal. We don't see a soul. and disoriented, lost from its usual route. And remains of old ships that the sea piously buried on the beach. The foam of this ocean, blown by the waves, falls asleep and dies in the sand. This land was not made for either people or animals. the wind manages to live here. And even so, its complaint is constant and often violent. Some say that the name Baía dos Tigres is due to the unnerving noise of molested beasts that the swirling sand causes in the upper cone of the dunes. feel desires d and kiss the day. The cacimbo saves him, but the star overcomes him by overflowing his red fire of passion beyond the horizon. Then lay your head in the sea and stretch out over the dunes. As if wanting to revive this end of the world where not even the saddest and most lonely of tigers could resist. " 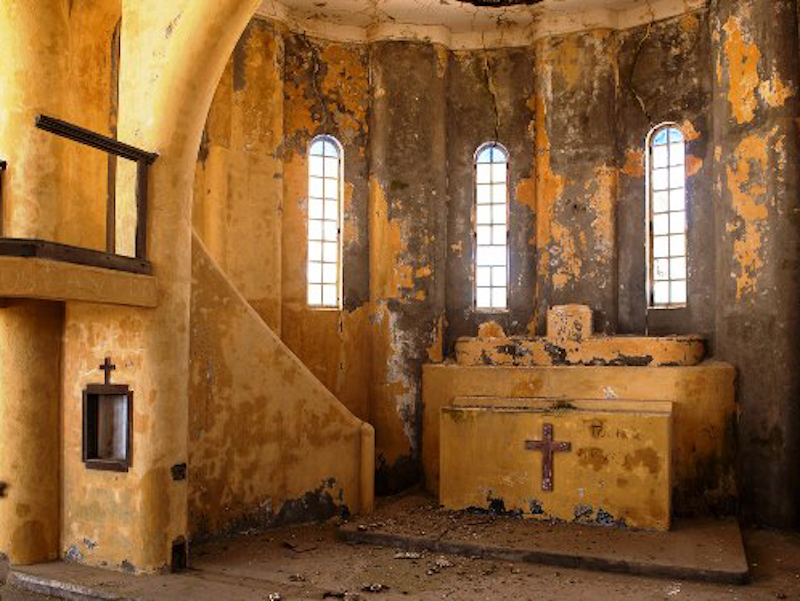 Between the 15th century and the date of the settlement of those sands, in 1865, navigating cartographers watched the periodic transmutation that took place there. Charts and navigation maps from around the world testify to the cyclical transformation of the sandbank into an island, and from the island to sandbank. The last time that Baía dos Tigres lost its connection to the mainland was on March 14, 1962. On this day, witnesses of the time say, a strong kalema with waves of more than ten meters broke the fragile sand cord that connected the Bay Tigres to the continent and transformed the settlement into an island. And so it remains today. At that time, the channels that brought fresh water from the mouth of Cunene to the Bay of Tigers ruptured.
Tigres Bay, or Tigres Island, is nowadays an abandoned, arid, salty, ghostly place, a sacred place in the middle of the dunes that continue to move under the force of fierce winds that cover everything as they pass. A place despite everything, fascinating, and with each passing day more increases the risk of its complete disappearance. 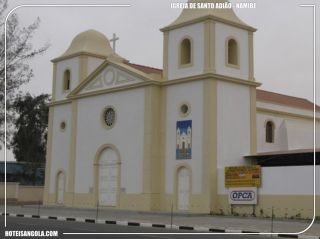 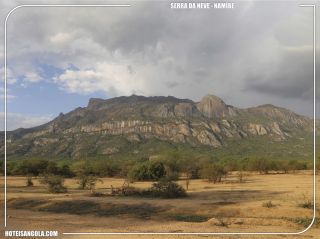 Next article
Church of Saint Adrião