Implanted in 1975, after the independence of Angola, the Armed Forces Museum is installed in the Fortress of São Miguel. See more The museum's collection includes twin-engine airplanes, tanks, various weapons and artefacts used during the War of Independence and the Civil War, highlighting a bust of the war leader and first President of the Republic of Angola, Agostinho Neto.
In the museum you can also find several statues that adorned avenues and squares of colonial Luanda and that were removed after independence, namely that of Diogo Cão, the first European to set foot on Angolan soil, that of Paulo Dias de Novais, the founder of the city of Luanda, that of Vasco da Gama, the discoverer of the sea route to India, and that of Luís de Camões, the greatest poet of the Portuguese language, among others.

Chronology*
1575 - Paulo Dias de Novais arrives in Luanda as governor, and has a fortress built to protect the bay immediately;
1625 - King Filipe III orders a commission to study the fortification of the city;
1634 - Construction of a new fortification;
1641 - Attack on fortification by the Dutch, who occupied it, renamed Fort Amsterdam, or according to other sources, Fort Aardenburgh;
1650 - Governor Salvador Correia de Sá e Benevides presented the new fortification plans of Luanda to the Overseas Council, under the responsibility of French engineer Pedro Pelique. The fort, which until the Dutch invasion had been called São Paulo, had its name changed to São Miguel, Saint of devotion of Salvador Correia de Sá.
1669/1676 - Reconstruction of the fortress in masonry, during the government of Francisco de Tavora, leaving completed a bulwark and two curtains;
1697/1701 - Construction of the gunpowder house inside the fortress, during the rule of César Meneses;
In 1771, cannons were cast in the fort, this being the only African fort where cannons were fused for its defense.
1876, 15 September - Ordinance to create the Degredados Depot in Angola which was established in the fortress in 1881;
1930/1938 - banished Deposit Termination and abandonment of fortification;
1938 - Installation of the Angola Museum by the Portuguese government; placement of tile panels in a bunker with scenes from the history of Angola and examples of fauna and flora;
1938, 8 September - classified as a National Monument, by Decree of the then Minister of the Colonies, Francisco José Vieira Machado;
1961 - Total removal of the museum's collection, returning the fortress to assume military functions; installation of the Advanced Combat Detachment of the Battalion of Parachutist Hunters in Tancos that had traveled to Angola in March 1961, and then the 1st Parachutist Company of Parachutist Battalion No. 21 remained there , until the creation of the new unit, in Belas (in 1964); installation of a Military Police Company; installation of the Chief Command of the Armed Forces of Angola.
1975 - 10 November, the last ceremony for the launching of the Portuguese flag in Angola, held at the Fortaleza de S. Miguel, under the force of the three branches of the Portuguese Armed Forces (Air Force Paratroopers; Marines of the Navy; Cavalry of the Army).
1975-1978 - General Staff of the Armed Forces for the Liberation of Angola (FAPLA);
1978 - July 31, the Central Museum of the Armed Forces opens;
1995 - Punctual interventions for the restoration of the building
1996 - Included in the UNESCO World Heritage List.
2001/2005 (?) - The fort has a (partial) military use and is integrated in the area defense system of sensitive points in the Angolan capital.
2013-4 April opened the National Military History Museum. 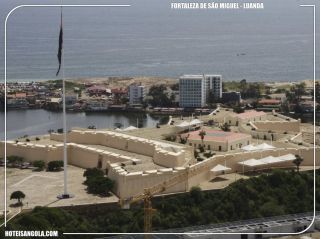