Origin - Established as a Integral Nature Reserve on 05/25/63
Classification - National Park, II, since 25-06-1970.
Location- It is located in the province of Malanje.
Area - It occupies 630 km².
Geographic Limits - 09 09 'to 10 02' South Latitude and 16 34 'to 16 52' East Longitude.
Natural Limits - In the North and Northeast the Park is bounded by the rivers Camifundi, Cuije and Caculo. To the south by the rivers Maubi, Candua and Camifundi. To the East and Southeast by the Caculo River and Cuije River, Dumba Kicala, Picada Calamungia, Dumba Kicala, Maubi Calongo to the rivers Cuque and Lussa.
Description - The average annual rainfall is 1350 mm and the temperature is 21.5 ° C. There are no large watercourses and life revolves around ponds and ponds that form during the rainy season.
The vegetation consists of open forest and dry savanna.
The protection of the giant black sable (Hippotragus niger) was the main reason for the creation of the Park in 1963. The Giant Sable was discovered in 1909 by Frank Varian, Belgian engineer of the Benguela Railway, and has been a figure since 1933 in the list of species "under absolute protection" of the Convention for the Protection of African Fauna and Flora.
It came to be considered extinct for more than 20 years, as a result of the armed conflict, having been rediscovered in 2005. In 2009 it was located, captured and marked, and nine females and one male are currently under protection in the sanctuary of Cangandala National Park .
The male of the Palanca Negra Gigante is black in color with white spots on the belly and between the horns. It weighs between 200 to 270 kg and is 1.9 to 2.50 meters high. Females are brownish and have less developed horns. The gestation period is nine months, with one calf per birth.

For a Flora lover, the vegetation corresponds to a “Miombo” forest also known as “Panda Forest” opened with dominance of Brachystegia Wangermeena (“Mussamba”) “Boehmi” (“quenge”) Other species such as Uapaca Benguelensis (“Mumbula”) Erythrina abyssinica (“Mulungo”) and Dyospiros.
For a fauna lover, in addition to the Palanca Negra Gigante we can find different species such as Ungulates, common Bambi, Gulungo, Sitatunga, Nunce, Palanca Castanha, Pacaça and Seixa. As for predators it includes the Lion, Leopard, Hyenas and the African Wild Dog.
The official language is Portuguese however the most widely spoken national language is Quimbundo. As accommodation you can find the Palanca Hotel located on Rua Comandante Dangereux and also the Hotel Mbanza Marimba. 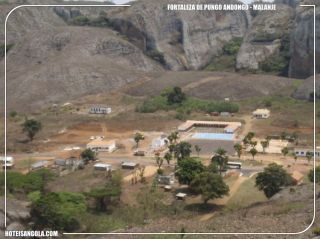 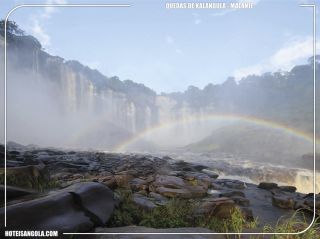