Tip is the principle of a particular action. Padrão is a stone monument erected in places discovered by Portuguese navigators and explorers.
Ponta de Padrão is the beginning of Angola's history in the cultural and missionary context. Ponta de Padrão is an island with a secular and vast history. This island is located in the Northwest of the Municipality of Soyo, Province of Zaire.
It is a very well-known island for its magnificent history. In the reign of D. João II the Portuguese arrived at the mouth of the river Zaire, under the command of Diogo Cão, in 1482, beginning the conquest of Angola. The primary step was to create an alliance with the Kingdom of Congo, which took over the entire northern region of Angola. In this way, the history of Ponta Padrão three can be framed in great historical periods, namely: Pre-colonial; Colonial and Contemporary.

Speaking of the standard tip in the pre-colonial era, it lacks a clear history since the history was lived traditionally. And in a nutshell according to remote tradition, tip of pattern was a place of division between southern Africa and sub-Saharan Africa south of the equator. And consequently, the pattern tip was called muan-a-nkukutu, because of the sea that supplied many fish that occasionally many of them died and of those that died generated the appearance of many animals named nkukutu.
It was also a region inhabited by a population that mostly lived on agriculture, hunting, artisanal fishing. The activity that was most practiced by them is artisanal fishing.
Pre-colonial times these lands did not know Christianity as they do today, but they did have a strong expression of traditional power (Almighty God) Nzabi-ya-mpungo.
Divisions have another connotation:
1st Pass caravels in order to find different lands of the other;
2nd Place of passage to meet the kings with traditional powers.

Speaking of the standard edge at the same time, it has become a historic place, a place of leisure, of religious manifestation, of political security.
A Historic Place
Looking in the past, this place was not venerated as it is today, our current history tells us that the tip of the pattern is the cradle of the mother of Jesus Christ called Mary.
The physical position presented to us by Maria's paw is also traditionally translated the place of integration for all those who go there for the 1st time. This integration is done with a symbolic gesture of the body which is the dance accompanied by the modern drink which is wine. There is usually a guide or elder on the island who tells us the past of the same place. 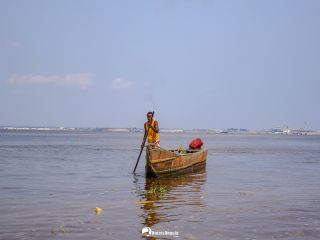