In this place, in 1580, the Battle of Massangano was fought, in which the Portuguese forces defeated those of King Kiluange of Ngola.
Later, in 1582, Portuguese forces, under the command of Captain Paulo Dias de Novais, were repelled by the Ngola, when they tried to penetrate the region, in search of the legendary silver mines.
This fortification was built by Novais himself (or by Manuel Cerveira Pereira, according to other authors), on the banks of the Cuanza River, in 1583, with the function of defending the prison (establishment of military colonization) that ensured Portuguese occupation in the region, expanding -The. In addition to marking the Portuguese military presence, this establishment guaranteed the integrity of commercial networks, including that of the slave trade to the American continent.
Subsequently, in 1640, Queen Nzinga's forces attacked Massangano Fort, when her two sisters, Cambu and Fungi, were imprisoned, the latter being executed. Faced with the occupation of Luanda by the forces of the Dutch Company of the West Indies, in August 1641, it was in Massangano that the Portuguese forces withdrew and where they resisted until the reconquest, by Salvador Correia de Sá and Benevides, in August 1648.
In Massangano, the person involved in the Inconfidência Mineira José Álvares Maciel was also detained in the 1790s, being released there to fight for his own survival.
Until the middle of the 19th century, the prison and its garrison were governed by a chief captain.
Some buildings and the ruins of Massangano were classified as a National Monument by Provincial Decree n ° 81, of April 28, 1923. Currently they are in the possession of the State, assigned to the Ministry of Culture.

The fort has a square plan, without bastions at the vertices. In its walls ten gunboats are torn. It is accessed by a vaulted tunnel from the arms gate, on the side facing the land. On its embankment are the service buildings: Casa do Comando and Barracks of Troops. 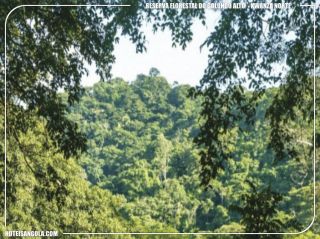