CHAPEL OF OUR LADY OF THE MOUNT

The Chapel of Our Lady of Monte is next to the Statue of Christ the King, the great exilrifices of the city of Lubango. Located on one of the tops of the Chela Mountain Range, the Nossa Senhora do Monte Chapel is also a sanctuary of religious pilgrimage that has great symbolism and importance for the Catholic community, also an important tourist and historical asset. 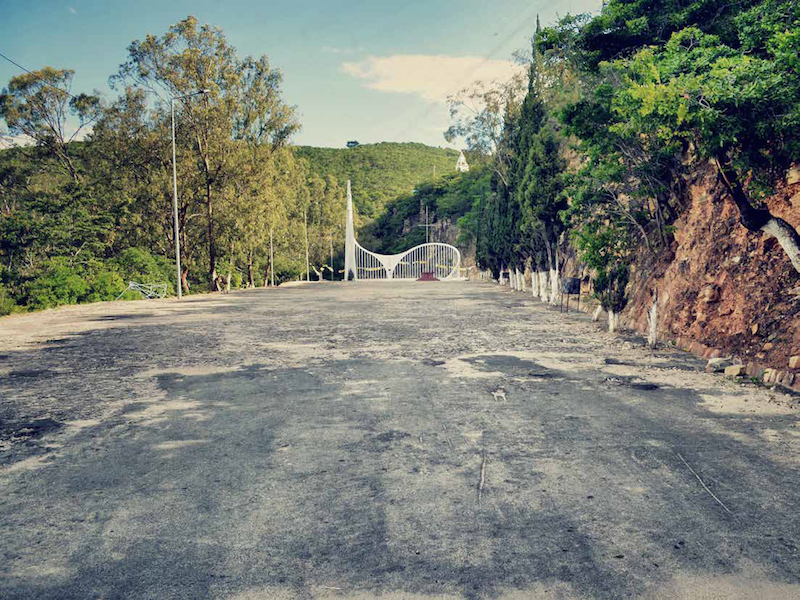 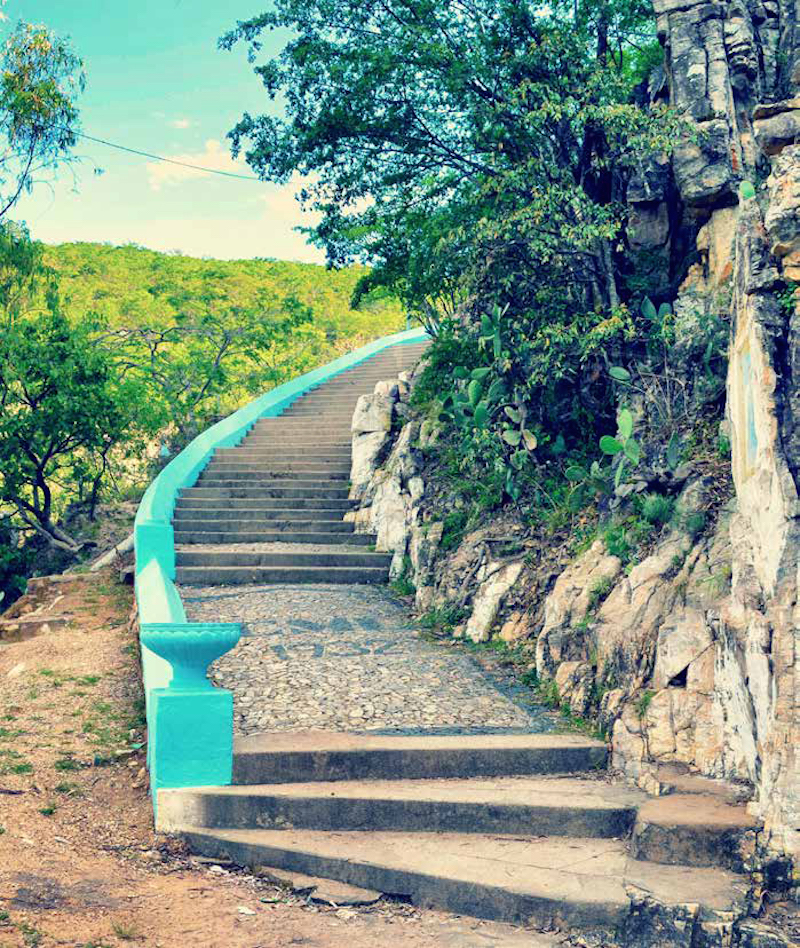 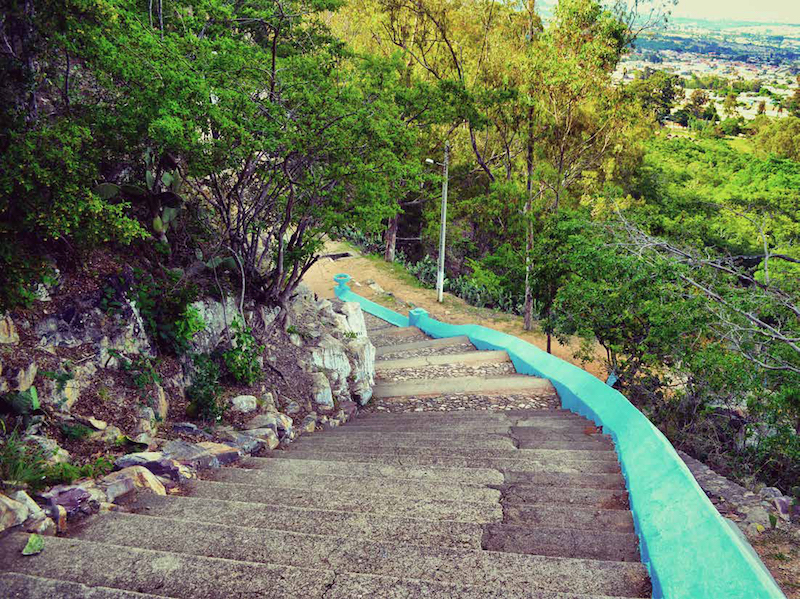 The construction of the chapel can be analyzed in two moments: (1) construction of a primitive chapel, guided by the bricklayer Jacinto Rodrigues and the carpenter João da Silva. It was still under construction, when on August 15, 1902, the parish priest celebrated a field mass next to the unfinished chapel, using an image of Nª Senhora da Conceição. It was Venâncio Ferreira Rodrigues who acquired, in Porto, the image of Nª Senhora do Monte, in fulfillment of a promise made. This image arrived in Lubango on June 29, 1903. After the original chapel was concluded, the new parish priest, Father José Martins, on behalf of the Bishop of Angola and Congo, blessed it on August 14, 1903. From August 15 from 1903 the population of Lubango started to go to the chapel to celebrate the pilgrimage that became traditional; (2) In 1919, João Henrique de Azevedo idealized and designed a broader chapel that could be visible from any corner of the village and was inaugurated in 1921. From 1930 the image was brought processionally from the chapel to the park, since many Madeirans, already elderly, did not have enough strength to go up to the chapel site. There were several interruptions in the pilgrimages and the last one happened in 1975 with the advent of the independence of Angola, having restarted only in 1986 (Sousa, 2013). 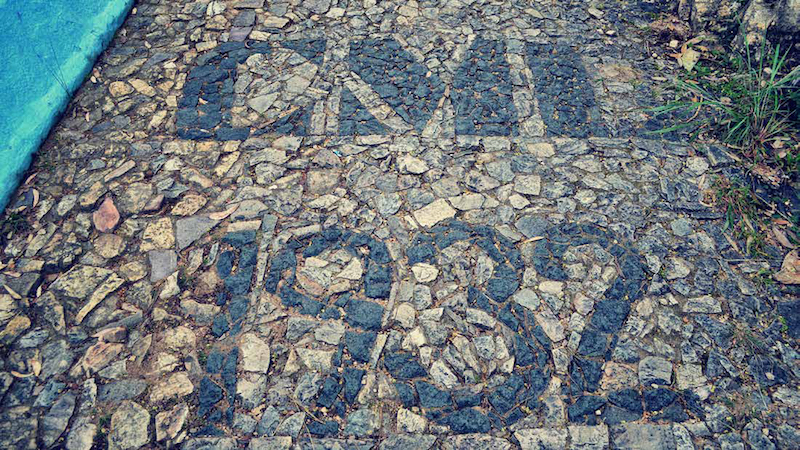 Although another chapel was built at the top of Serra da Chela, the place remained insufficient to accommodate a large number of believers who came to it. Thus, in order to accommodate more believers, the architect Frederico Ludovici conceived an open-air project in a space below the chapel where the masses of the month of August are today held, when the flow of believers is greater. The access to the chapel is made through a paved road that meanders the mountain in an approximate distance of 300 meters to the space destined to the field mass which is a plan. Then there is a 200-meter staircase towards the chapel built in the mountains. From an initially elite place (predominantly Portuguese) it became a place of worship frequented by believers of various nationalities and social backgrounds. The chapel is today a symbol of Catholicism in Lubango and the month of August represents the highest point of the celebrations for the ascension of Our Lady, mother of Jesus.
The procession The 14th of August has been marked by the procession of candles from the Chapel of Nossa Senhora do Monte to the church of the Cathedral (built in 1955). There are a significant number of believers involved in this process who are slowly marching through the city's arteries, reciting the rosary, praying the Our Father's prayer and asking for Our Lady's grace and mercy. The image of Our Lady of the Assumption offered by Venâncio Ferreira Rodrigues became the symbol and image of choice for the procession to the mount of Catholics seconded in Lubango. The pilgrimage takes place on the 15th of August and began at the Church of Nossa Senhora de Assunção (built in 1963, known as Igreja da Lage). Then, she was taken in a car procession to the area of ​​the statue of liberty where, through a pedestrian procession, she was carried on her shoulder to the chapel located on the hill. Currently, the procession has departed from the church of the Cathedral.
Once the andor was carried to the Capela do Monte, a mass is held in honor of the patron saint. Initially, the patron saint was deposited inside the chapel and stayed there. Due to successive assaults on account of the monetary amounts that were deposited inside the chapel, mainly by the faithful who carried out their promises outside the chapel and put the money under the door, the andor began to be deposited in the church of the Cathedral. After a few years with activities limited to the August procession, today we can observe the organization of services twice a week (on Fridays with the prayer of the rosary and on Sundays with a mass in the terrace) and a strong movement to revitalize the mystique of the Chapel of Nossa Senhora do Monte 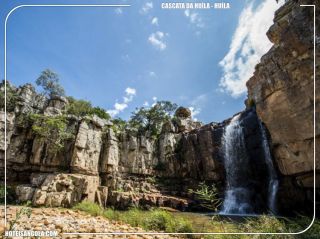 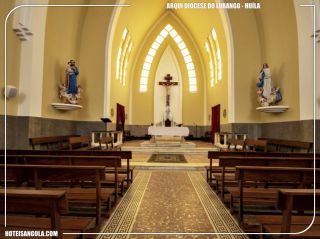 Next article
Interior of the Archdiocese of Lubango