The Cunene River, with its springs in the humid wetlands of Cumeada Transversal.
(JESSEN surface IV)
Monte Chimbango is an “inselberg” (island mount) that has been left over from intense geological erosion over millions of years. At an altitude of 1929.74 m it is the culmination of two hydrographic basins:
The Cuanza River basin and the Cubango River basin. It is also the highest point in the eastern part of Angola, to the right of the meridian 16ºE Gr. Approximately the meridian of Huambo. In an area of ​​about 850 000 km2, Chimbango is the culmination.
Morro Chimbango or Morro do Chinguar. It is the highest point in the Cuanza basin, at an altitude of 1929.74 m.
The Northwest slope feeds the Cuanza River through the Alondo River and then the Cutato das Mongoias. The Northeast and South slopes feed the second great river in Angola, the legendary Cubango which, after more than 1000 km, gives rise to one of the largest sanctuaries of nature: the Okavango delta already in Botswana territory. The Cubango River is endoreic, meaning its waters do not go to the sea, the Cubango River flows into an immense plain (Okavango Delta).
The Cunene River rises in the main watershed of Angola. (Surface IV of JESSEN)
On the south side, the Plateau descends with a relatively uniform slope, but with irregularities, until it is covered by the sediments that occupy the southern part of Angola.
The Cunene River follows the slope of the low plain, carved into the old massif and only rejuvenated by the little-fitted courses of this river and its tributaries, even beyond Capelongo, half a hundred kilometers further downstream, at an altitude of 1150 m, the river enters in the detritic deposits that will connect to the sediments of the Cuanhama plain (altitude around 1100 m), which the river follows along the western edge.
Beyond, the river reaches the old "bed-rock", begins to have rapids and soon reaches the falls of Ruacaná, with 124 m of height, that mark the beginning of the international course.
Downstream of them, the Cunene River flows at a height of 750 m and inflects into the sea, which will eventually reach through a valley that is always docked, with waterfalls and sections of extremely deep and wild canyon, in a desert region.

Three most important tributaries drain to the South.
The area that goes from the Cordillera Marginal, Poente do Huambo, to Chicala Cholohanga ex. (Vila Nova); to the east of this village, the drainage is made by the Cubango River; to the North, through the Queve or Cuvo River. These tributaries are, from the West, the Cunhongamua River, the Cuando River and the one that is usually called the Cunene River.
The first is born in the Cordillera Marginal, west of Vila Flor, 2500 m altitude, (Rio Cunhongamua)
The second originates in the vicinity of Chicala Cholohanga eg (Vila Nova), in the middle of the Main Plateau, here at an altitude of 1840 m. (Cuando River)
The third is born ten and a half kilometers further south, also in the Planalto Principal, here a little dissected and at an altitude of 1750 m. (Rio Cunene) Coming from the mouth and taking each of these tributaries, let's see the length that is obtained for the Cunene River until the springs:
By the Cunhongamua River 1217 km, by the Cuando River 1220 km and by the one called the Cunene River 1203 km.
Therefore, the main trunk of the Cunene River must be considered as going through the Cuando River and the Rio as being born in Chicala Cholohanga ex. (Vila Nova), the source of Huambo City.
The course of the Cunene River, which has a total length of about 1220 km, with three parts with different characteristics.
In the first, (Upper course) from the springs to entering the detrital deposits, the river follows the slope of the plains; it has little erosive action and the gap in relation to the conserved parts of it is remarkably constant (around 100 m). The length of this part of the river is about 475 km and the average slope is 1.45 p. 1000.
In the second part, (Middle Course) with about 360 km, Rio flows in the sediments of the Cuanhama basin (in a broad sense). Although already a little embedded, this part of the course corresponds to the final part of the old Cunene River, which flowed into the Cuanhama Etocha-Chitado plain, where it flooded and was lost by evaporation from an inland lake (represented today by the Caldeira da Etocha). The slope of this part of the course is 0.22 p. 1000. This second part of the Rio course has final characteristics, but in reality a medium course position.
The third part (Lower Course). The old Cunene River was captured in the Quaternary by a river that certainly had a small flow, but that flowed right into the sea and therefore had a great slope. The section rejuvenated by the capture is about 380 km long and constitutes the third part of the Cunene River. Rio rejuvenates, has strong erosive action and several waterfalls, fits and crosses mountainous regions, sometimes with very hard rocks, with a great slope (average of 2.8 p. 1000). Although of very special characteristics, it is the lower course of the Cunene River.
The course of the Cunene River is about 1,200 km, of which 960 km are exclusively in Angola. The hydrographic basin of the Cunene River is 272,000 km², of which 150,800 km² in Angolan territory.
The Cunene River is one of the few permanent rivers in this arid region. Its average annual flow is 174 m³ / s at the mouth. 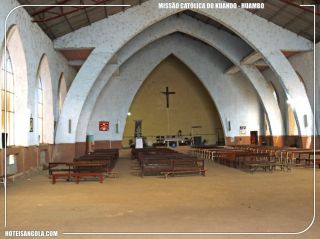 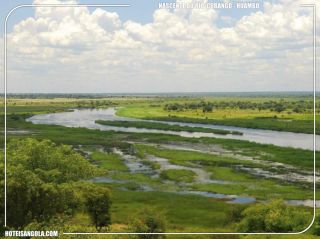 Next article
Source of the Cubango River (Okavango)