Dungo is a dry river (oued) that receives a series of tributaries, flowing into a sandy alluvial surface formed by annual discharges. These water courses over thousands of years will have made visible in various places concentrations of artefacts and cuttings probably as a result of the dismantling of carcasses of marine animals or terrestrial animals of medium and large size, such as the ancestors of ungiris or olongos (Tragelaphus strepsiceros) or even elephants, given the size of the cutting instruments. The stations were studied from the geological point of view by Dr. Mascarenhas Neto from the Angolan Geology and Mining Services in 1956, by Professor Gaspar de Carvalho who in 1960 , which collected several lithic pieces, some of which were offered to the Mendes Corrêa Museum of Anthropology in Porto. A study and publication by Dr. Carlos Ervedosa resulted in them in 1967.

In 1973 (with Dr. Vitor de Oliveira Jorge) and in January 1974 I visited the station where a few dozen steaks were collected and deposited at the Museum of Archeology of Language Courses, in Lubango.

These were the target of some typology studies by students of the Language Courses.

From 1976 onwards at the initiative of Luís Pais Pinto, new surveys were carried out and years later, Dr. Manuel Gutierrez under a cooperation agreement with the Center National de Recherches Scientifiques, together with a team from the National Museum of Archeology from Benguela an in-depth study that included excavations and which resulted in a set of dates attributing the first dates to Dungo stations (IV and V) (in the photo where we are sitting and on the other side you can see the sandy layer that covers the archaeological layers .in the middle of Dungo's mulola) obtained by scientific methods. 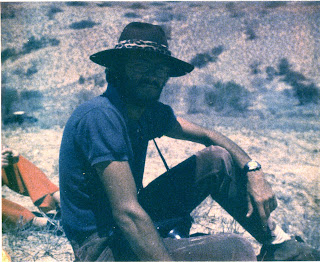 That French archaeologist led a team (Claude Guerin, Maria Lena and Maria da Piedade de Jesus) that eventually discovered a place for the "disassembly" of a blue whale (Balaenoptera sp.) Carried out by a group of hunter-gatherers from the Ancient Paleolithic and that left more than 57 pieces in the place, including steaks, axes, splinters of different sizes and remains of work to obtain utensils, in addition to the remains of the skeleton of the cetacius.

It should be noted that the place is more than 3 km from the coast and 65m high from the average water level, where there should be a beach like Caotinha or Baía Azul. The animal was quartered at the place where it hit the shore and must have fed the group for a long time, since the meat could have been kept dry in the sun or smoked, more than 300,000 years ago. [in Exploitation of a grand cétacé au Paléolithique ancien: the website of Dungo V à Baia Farta (Benguela Angola) - Gutierrez et al. Contes Rendus de lÁcademie des Sciences IIA pages, 357-362, 2001)

On the Chamume beach, close to the site, several skeletons of whales of the same species are visible that give to the coast, even today. It is for this reason that probably nomadic groups from Acheulense and from later times have been maintained for probably dozens of years. 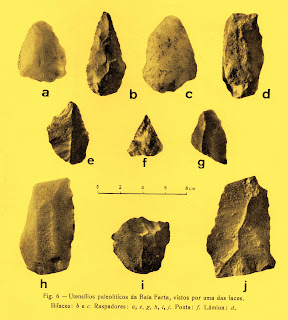 From 150,000 years before us, the climate in Angola has become progressively drier and the place will have been invaded by the Kalahari sands that will have covered the entire coast until probably Luanda. At the same time the sea will have gradually decreased in level as the ice caps increased at the poles, leaving the place, previously beaten by the waves far from the sea and far above its level. The traces of economic activity of the hunter-gatherers were covered by red sand dunes, even today, in some places, on one side and the other of the Dungo mulola, the height reaches 20 meters above the rock formation where the artifacts.

It would probably only be "occupied" in more recent periods of Wilton culture, with the ancestors of the Vassekele or Kuissis around 5,000 before us when the climate became more favorable.