A homecoming journey to a place that’s drawn comparisons with the elegance of Sintra. We would add that it’s a picture postcard album with a host of natural wonders.

António Luís is a tall, slim man with a thin moustache over lips that open into a broad smile, even before he knows who I am. The fragility of his 85 years slow him down as he walks through the garden around the house built over four decades ago, in the final years of another era. It took us two hours to get here, following directions based on faded memories of a land abandoned in a hurry. 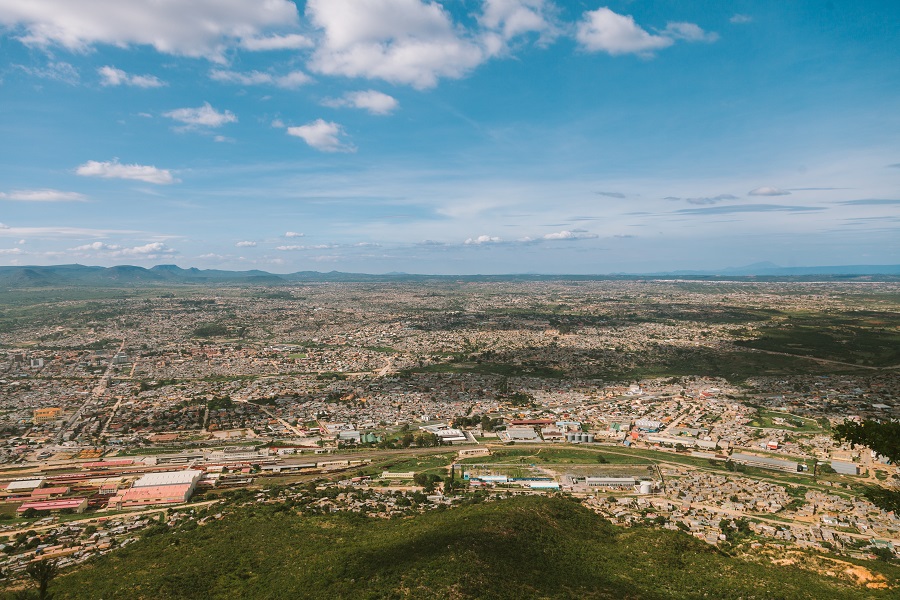 The journey back was decoded from the memory of odd houses, names that arrived through messages between two continents, before coming face-to-face with a neighbourhood swallowed up by rural exodus, refugees from the civil war and the construction of annexes and rooms for children born in times of peace. Look for the João de Almeida neighbourhood, turning left at the roundabout as you leave the city, look for the sergeants’ school, the old courthouse… We walk around, asking for directions and realise not all the old people were born here. We talk to people who came during the war looking for peace and get conflicting directions. It’s this way. No, it’s that way. I think there are some houses further on. I don’t know. We realise we’re in the wrong place and what we’re looking for, if it still exists, is to the north-east on the old Benguela road. Now it seems easy, we’ve found the school, the court-house must be close by. We ask those we meet if they knew Francisco Saraiva, my grandfather. No-one does: “Never heard of him,” “We’ve lived here since 1980,” “We moved here ten years ago”.

We’ve almost given up when someone says, “António’s father might remember”. Teresa puts her jacket on and leads us through narrow alleyways with an uneven surface. There are kids playing, women working a water pump. António Luís doesn’t take long to place me. There’s genuine contentment in finding out who I am. He talks to me about my grandfather, my great-uncles, my father, he talks as much as memory allows. He calls Malita, his 56-year-old daughter, a playmate of my aunt’s, my father’s sister. “It’s only the trees that aren’t there,” says Malita. Despite his unsteady gait, António takes us to the house where I spent the first year of my life, where my sister was born a year earlier, he tells us that the well that supplies the water pump was opened by my grandfather. Very little remains, apart from the 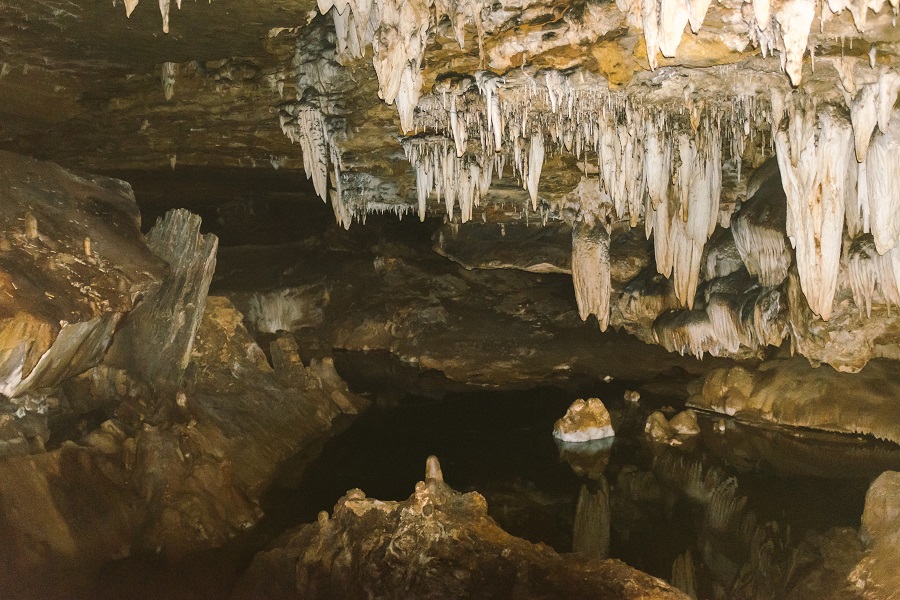 stone of the houses and António and Malita’s memories. Even so, there’s a sense of belonging that makes me feel I’ve come home. This was where I was born.

For years, Lubango was just the name I used to fill in my place of birth on official documents. These other memories were associated with a different name: Sá da Bandeira, a name repeated at family lunches, a synonym of another life, an expression that tasted of the grapes, oranges and melons the land would offer, recalling the starting point for so many adventures told afresh each time. Finally Lubango and Sá da Bandeira merge into one. The city of the black-and-white photographs and the sepia-coloured postcards comes into being in glorious dawns, in the scent of hot days, and in sun-sets only Africa knows how to paint. 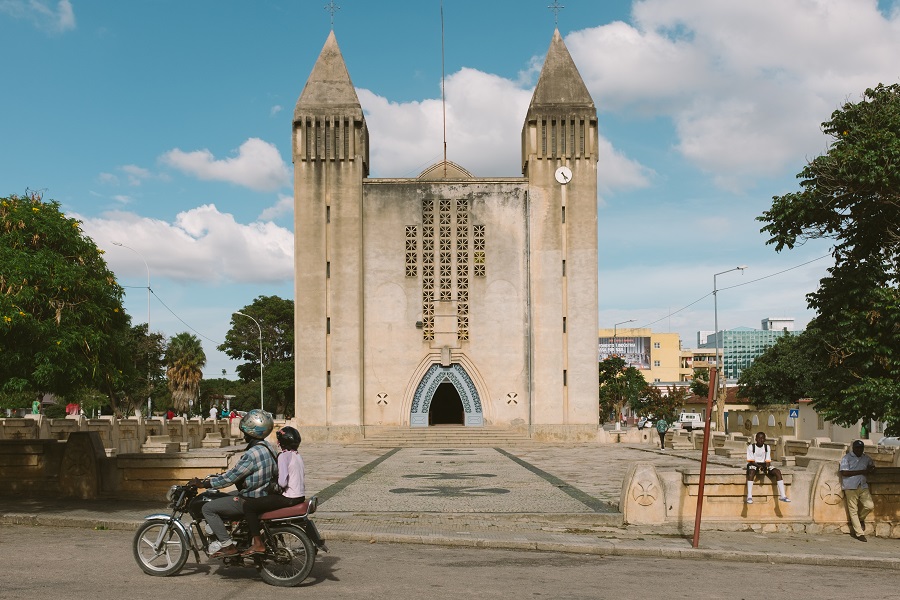 We start in the centre: we walk along the streets of a city it’s easy to get around, thanks to wide streets and pavements. We cross paths with zungeira mothers, balancing colourful basins on their heads against all odds. They’ve got everything that could possibly be sold. On their backs, they carry their children in broad colourful cloths. The purple jacaranda and red acacia frame the Portuguese buildings: the Livraria Lello, now closed, the Art-Deco buildings of the Arco-íris Cinema- -Theatre, now undergoing restoration work, and the National Radio of Angola-Huíla, as well as other older buildings such as the seat of the provincial government, the first railway station and the post office.

The following day, we leave the city and take a ride with Mateus to the Zootechnical Station of Humpata, on the way to Alto Bimbe. Leaving Humpata, the tarmac road turns into a track. We follow the tyre marks of whoever passed there before us, sometimes not even that. It takes steady, experienced hands to drive the 26 kilometres or so that lead us to one of the most breath-taking viewpoints in the region. The view, the silence and the monumentality of the steep slopes of Alto Bimbe are worth every bump, every stuck tyre, they’re worth it all.  At an altitude of over 2300 metres, they’re more than a match for the Fenda da Tundavala, on the southern plain. We pause for a rest and to express our amazement under the contented gaze of some young goat-herds. 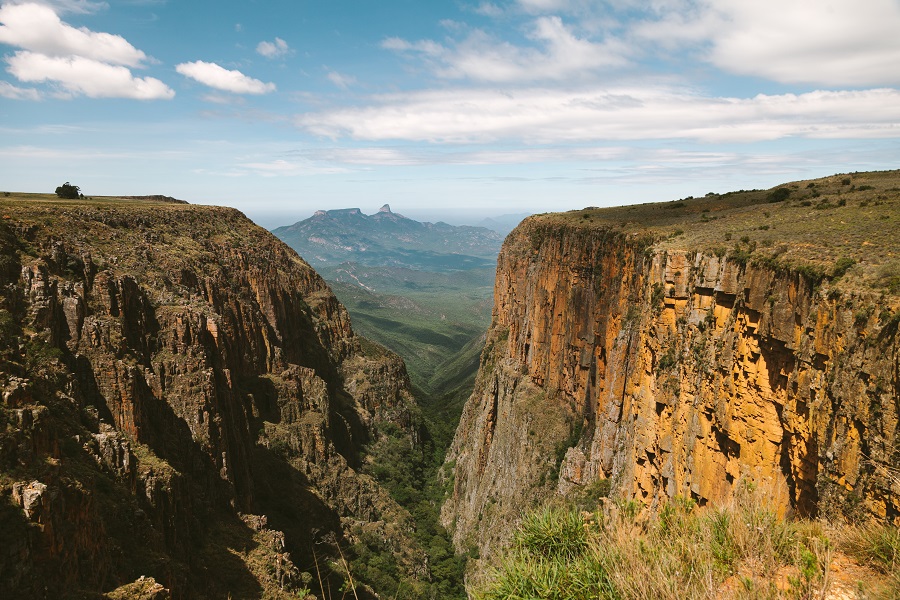 We make the return journey to Humpata, stop at the market to buy some flashlights and head towards the caves of Tchivinguiro. Between the Caholo road, in excellent condition, and the caves, there’s a difficult track that’s so narrow in places that we have to close the windows and pull in the wing mirrors. On the way up, we stop for five minutes to let a herd of cows go by. But it all pays off at Huíla. Mário is the guide appointed by Soba to show us the caves, which go on for miles. “At the bottom, there’s a conference room for over 1300 people. A big, big thing,” says the municipal administrator of Caholo. There are several stories about the size of the caves, stories of those who’ve gone in at seven in the morning and come out almost ten hours later and even so, “couldn’t find the end”. There are parts where you have to crawl, others where you can only go sideways. At the entrance to the cave, kids jump into the water that rises up from the depths of the earth and accumulates in the lake up ahead, while a blue, white and orange lizard lounges in the sun among the rocks.

On the last day, we climb up to Tundavala. From the viewpoint that separates us from the thousand-metre precipice, we should be able to see the plain of Bibala to the north, but Lubango’s microclimate, with its year-round mild temperatures, can play tricks. From Bibala a fog is coming in that threatens to cover everything. On the way to Namibe, there’s somewhere else we have to stop: the Serra da Leba viewpoint and road. Nothing can prepare us for this view. An asphalt snake on the back of the mountains. I recall the words of Austino Muámpatchi, head of culture in Humpata: “God didn’t want us to reach the sea, but we went and bored through the mountains.”